Jaime Gee shares her thoughts on the introduction of plastic money and plastic phones.

It would seem this week’s focus is on all things plastic; soon we’ll be handing over plastic money to pay for rubbery iPhones.

I’m happy about this. Actually, I’m rather relieved that should my husband’s wallet end up in the washing machine for the zillionth time I need not worry about its contents dissolving. Who am I kidding? Those notes disintegrated into my shoe fund long ago!

Ending 300 years of paper tradition, the new polymer banknotes are “clean, reliable and secure”, according to the Bank of England’s Chief Cashier, Chris Salmon.

And security is certainly key. According to The Times, fake bank notes with a face value of £13.1 million were taken out of circulation last year.  However, the new polymer banknotes will apparently deter counterfeiters thanks to advanced security features making them difficult to forge. 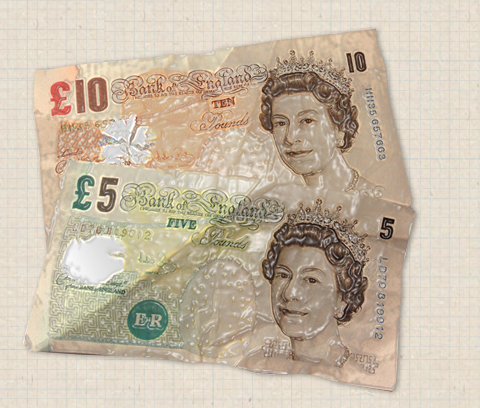 The security theme continues with Apple’s much-anticipated iPhone 5S, and its new MI6-esque fingerprint sensor. Now, initially I thought this was great, another Apple ingenuity. But discussions at JAM towers have made me rethink the value of this Q like security. Picture the scene: you’re mid event, an iPhone in each hand, and stabbing away at your laptop with your chin, and no doubt a tray of canapés balancing effortlessly on your head. iPhone number two chirps to life whilst you’re talking into the other handset, you thrust the phone at a colleague for them to answer the critical call from The Daily Mail to be met with, well, nothing but a screeching phone that only you can physically answer. Days of delegation are quickly fading.

But as Lincoln once said: you can’t please all the people all of the time. I shouldn’t moan about others not being able to unlock my iPhone, after all, I’ll be pleased of this feature should my phone fall into the hands of a light fingered rascal. Instead, I’ll focus on the new super duper (technical term) iSight camera. According to Apple’s bumf, the 8-megapixel iSight camera features a 15 per cent larger sensor, True Tone flash, burst mode and slo-mo video.  I have absolutely no idea what any of this means but the way they sell it makes me believe that my relentless images of every ounce of food I consume or my inebriated endeavours will look even better (or worse!).

Along with the new iPhone 5S, Apple is making the iPhone accessible to the masses with a more cost-effective, polycarbonate (fancy word for plastic) iPhone 5C. With cheaper, just as effective, Smartphones on the market Apple needed to up its game in terms of pricing and the iPhone 5C offers a more competitively priced option. And it’s by no means of lesser quality; it’s basically the same as the existing iPhone 5 but with a slightly larger battery, and a steel-reinforced body, hidden under its vibrant plastic coating. 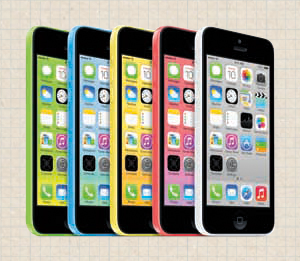 I’m personally not a fan of the plastic casing on the iPhone 5C but I guess it does provide a little bounce for the inevitable moment my phone slips from my hand mid selfie and smashes to the floor. At which point I’d be pulling out my plastic cash and hotfooting it back to the Apple store.