In a triumphant and historic move last week, the Supreme Court in the United States ruled that same sex marriage is legal across all 50 states.

The team at JAM was delighted to hear this announcement and we found it fascinating to see how the internet responded to such a contentious issue.

Google kicked off the celebrations by implementing a very special search result. If you were to type ‘gay marriage’ into the search engine last Friday you’d have seen a string of cartoon couples holding hands across the top of the screen with rainbow colours that represent the gay pride flag. It was seriously cute! Just in case you missed it: 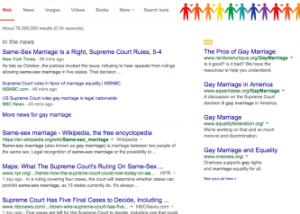 Not to be outdone by Google’s celebrations, Facebook unveiled a new feature that allows users to apply a rainbow-coloured filter to their existing profile picture, mimicking the gay pride flag. If you’ve not added this filter to your profile picture yet, you probably feel very lost in a sea of rainbow right now.

According to the social media giant, in the initial first hours after the ruling on same-sex marriage was announced, 3.8 million people in the U.S. had 10.1 million interactions (likes, posts, comments and shares) on Facebook related to the decision.

Twitter also joined in on the action by adding a rainbow heart to any tweet with the hashtag #LoveWins. Snapchat, too, was gleaming with pride as it added a rainbow-colored filter that read “Making History” for users to embed in their posts. Users could watch a live feed of Snapchat stories from America, as the news broke across the states.

Not wanting to miss out on the celebrations, we’ve been flying the gay pride flag at JAM Towers too:

It was fantastic to see the support for gay marriage last week both on and offline. Our favourite picture this week has to be this amazing shot of the White House proving that love wins: 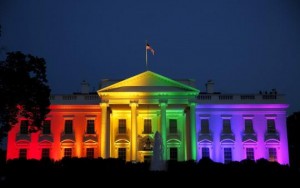 Thanks to the likes of Google and Facebook, it was easy for the world to join in with America’s celebrations. Well done, Internet! And well done, USA!