Here at JAM Towers, we are immensely proud to be located at the heart of the coolest place in our beloved city of Manchester – The Northern Quarter.

Our lovely office sits in the middle of a bustling pot of restaurants, bars and cobbled streets, and whilst the reputation of the NQ has soared in recent times due to the opening of some delectable eateries – one particular restaurant has been at the centre of local media attention recently (see this piece on The MEN). Local Chinese Sweet Mandarin has been asked to serve David Cameron and the leader of China at a summit at Number 10 Downing Street.

Sweet Mandarin was opened 10 years ago by Oldham sisters Helen and Lisa Tse, and a decade after its inception, the chic Chinese has Kung Powed its way to winning several awards, including Gordon Ramsay’s Best Local Chinese Restaurant in the UK, the 1 AA Rosette for 2014 and even had the honour of approval from the Queen!

That’s right, the Denton Duo were placed on the New Years Honours List 2014 for their dedication to services to food & drink. It appears, like the rest of the nation, that the Queen can’t resist some Chinese food at her prestigious Peking Duckingham Palace.

Helen and Lisa were part of a delegation of Manchester business who joined PM David Cameron on a visit to China last December – and it appears as though they made quite an impression after serving up a tremendous banquet at his home, including their legendary Claypot Chicken and the intriguing Sweet Mandarin mango pudding to the British and Chinese leaders.

The latest achievement from this Manchester restaurant is testament to the local notion that the sky really is the limit for Manchester’s hipster haven – the Northern Quarter is getting famous, and Sweet Mandarin’s reputation just got that little bit sweeter. 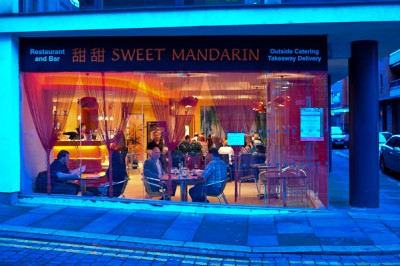