As social media specialists we always keep a close eye on new digital developments, so we are very excited that Twitter has finally launched Twitter Moments in the UK.

Aimed at those who find Twitter confusing, Moments makes it easy to find the ‘best’ posts on the day’s stories by curating real-time, picture-led updates on breaking news. Led by Twitter’s in-house editorial team, comprised of former journalists, it groups together interesting tweets on single subjects from its 18 production partners including The Sun, Sky News and BuzzFeed UK. What’s more, users can ‘follow’ a Moment they are interested in, which allows them to easily keep up to date as news unfolds.

Moments appears as a new ‘lightning’ tab next to notifications, which users can click on to see a list of stories “that matter right now”. Once the user selects an individual Moment, they are able to start swiping through a collection of tweets, videos, GIFs, photos and Vines – all on the same subject.

Twitter chose the 15th December to launch Moments, which just happened to coincide with the launch of astronaut, Tim Peake, into space. The former Army major is the first Briton to join the crew of the ISS and is employed by the European Space Agency.

Throughout this momentous occasion, Twitter Moments was updated with Sky News footage of Peake’s journey, tweets from Peake himself and tweets from the European Space Agency. These live updates allowed the whole of the UK to enjoy a detailed account of the historic event from wherever they were in the country. 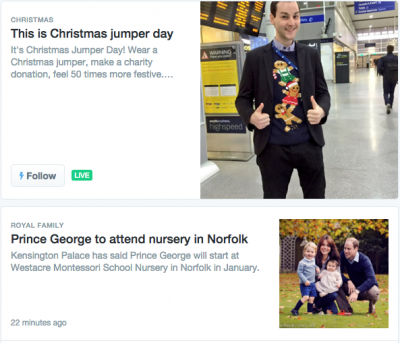 Whether it is space travel, sport, politics, fashion or celebrity related this new feature will make it a lot simpler to monitor stories that are relevant or of interest. PRs will be able to monitor stories more easily on behalf of clients, and it is another useful tool to track PR campaigns.

Moments also taps into a dominant trend whereby consumers are increasingly demanding instant updates. Being able to watch news stories or trending topics from across the world unfold in real-time will appeal to the masses who demand immediate access to content. Combined with the Twitter owned Periscope app, which allows users to live stream events, this new development could position Twitter as a direct competitor to the likes of BBC News.

If you would like to find out how the JAM team could help you with social media, please get in touch on 0161 850 0565 or email Jaime@jampr.co.uk