The word on the street

So, ‘Selfie’ has been named as word of the year by Oxford Dictionaries – the mania for sharing self-taken self-portrait photos.

The Internet is now a place for me, me, me, and more me and it’s reported that 53 million pictures have been tagged online with #selfie in Instagram alone. Some selfies have to be questioned though – ‘selfies at funerals’, ‘selfies in the bathroom’ and ‘selfies at serious places’….hmm not sure about those. Some of our favourite selfies include Pope Francis posing with a group of teenagers, Beyonce with a lucky 15-year old Australian fan but here is a great review of some of the most memorable selfies of 2013:

The forward-facing camera angle was a stroke of genius by the smart phone development people, as it serves only one purpose really. But not all selfies are the same. Oh no, there’s a whole host of varieties to choose from:
• the high angle shot (carefully trying to avoid too much awkward arm exposure)
• the mirror self portrait (ideally with eyes looking in the right direction)
• pouting and doe-eyed close ups (showing impeccably applied make up or a particularly good hair day)
• fashionista shots (showing the taker’s amazing dress sense, or a snazzy work outfit)
• beach body pics (from the neck down with a hint of seaside ahead)
• group selfies, cramming as many people into the shot as possible

Selfie beat terms such as ‘twerk’ (a form of dancing made popular by a certain pop princess), ‘binge-watching’ (when a person watches several episodes of a TV series in one go), bitcoin (a digital form of currency allowing online transactions to be carried out), and ‘schmeat’ (made famous by the Dutch scientists who made the world’s first in-vitro hamburger) to become the crowned the 2013 word of the year.

To celebrate and join in the fun, here’s a selfie of the JAM team today – say cheese! 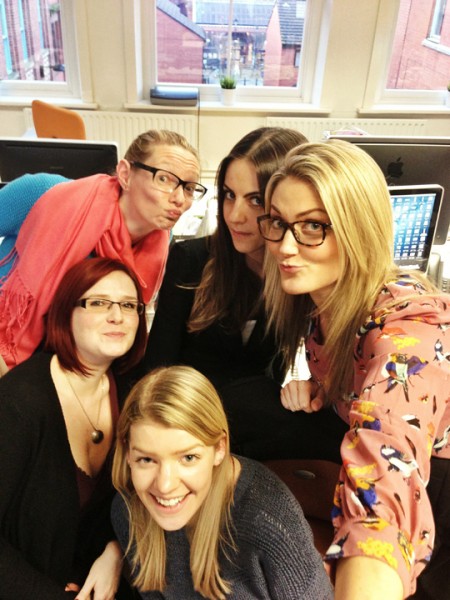