As if the build up for the Fifa World Cup, which kicks off next month, wasn’t exciting enough, The Printworks have released their very own World Cup song to take on the chart rivals.

Written, produced and performed by Aniff Akinola, aka Box Bottom, Our Telly’s Bigger Than Your Telly is an addictive tune that will hopefully go down in World Cup history.

The video features local stars like Bez and Rowetta from Happy Mondays and boxer Ricky Hatton, along with a group of volunteers and iconic Manchester landmarks as a backdrop.

Available to download on iTunes from June 9th, all proceeds from the track are being donated to Forever Manchester who support local community groups making a positive change across Greater Manchester.

Thursday was an exciting time for us Jammers as we headed out on the road – well, a few miles down the road – to MediaCityUK to be precise – to film a segment for BBC North West Tonight promoting the track. #JAMontour! 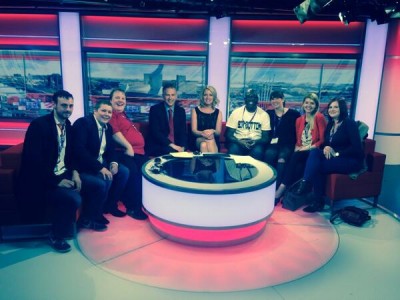