This week marks the launch of 24, a new national weekday newspaper aimed at readers in the north of England and south west Scotland.

Labelled as the ‘North’s National’, 24, says that it has a “for us, by us approach”, and aims to provide a northern perspective on national stories, making a stand against London-centric newspapers. The newspaper’s distribution reaches a population of 1.15 million adults in areas across Preston to Lockerbie and Hexham to Workington, regions untouched by the Metro. 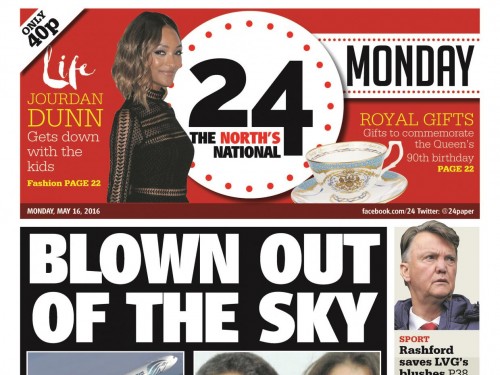 Similar to Metro and the i, 24 takes a politically neutral stance and offers readers a digest of national stories, lifestyle features and celebrity gossip, alongside regionally-focussed columns and sport relevant to the area.

The news of the launch came much to our surprise following the swift demise of The Trinity Mirror’s equally experimental title, the New Day – which closed only two months after its launch as a result of poor advertising sales and circulation.

Despite the doomed omen of the New Day, 24’s Editor, Dave Helliwell is positive that the title will not face the same issue because it has a different business model. The 40p tabloid, published by the CN Group, will work closely with the Press Association to generate content for the publication, to keep costs down.

To avoid competing with titles such as Manchester Evening News, 24 is not available in some major cities in the north, including Manchester, much to JAM’s disappointment. Fortunately, content will soon be available online, however on a subscription basis.

Nevertheless, we believe there is a market for northern focused news. We are as much part of the UK as the south, and our news and sport is also just as important. Despite the reported decline in print newspaper sales, the launch of 24 is certainly a brave move, but one we applaud as an agency based in the north.

If you’re interested in expanding the presence of your business across the UK through print and online news outlets, contact our MD, Jaime Gee at Jaime@jampr.co.uk, to discuss what JAM can do for you.