We have happily been on the receiving end of many PR briefs here at JAM, from companies asking us to pitch for their latest product launch, through to briefs from existing clients looking for an additional boost in brand awareness.

Over the years, we have seen hundreds of different types of briefs, from very detailed 20 page documents, through to a few lines on email.

Something that we have noticed is that clients and prospective companies simply do not have the time to write detailed briefing documents which means that we are sometimes left making assumptions, drafting a press release or proposal document based on a fleeting idea, and hoping what we suggest or produce is along the right lines.

Whether it is for a full blown public relations campaign, a press release, or social media activity, it’s so important to get the brief right so we understand what we are all working towards. It saves time in the longer term, means less amends along the way and reduces the risk of misinterpretation or error.

As experts in public relations and social media management, we’d like to offer some guidelines on what to put in a PR brief to ensure we have all the necessary information to carry out our award-winning campaigns:

In many cases, our role is to interrogate further to ensure we fully understand what is expected and what the overall goal is so do expect questions along the way from us. We always aim to get under the skin of our clients, both existing and prospects, so we can act as an extension of the marketing team and really understand the business.

So, if you are looking for a new creative approach to PR, want to educate audiences on a new product or simply want to discuss a new campaign, do get in touch with us and we’d be happy to advise you on how to go about preparing the perfect public relations brief.

Yesterday’s blog looked at Facebook for Business and how businesses can make the most of their presence on the social media channel. But we’re intrigued by another project launched by Facebook to place itself at the centre of all businesses’ marketing strategies…

Don’t be alarmed by the jargon-tastic name. It’s a device a company can stick to the ceiling of their shop, restaurant etc, and when a smartphone user passes within its vicinity, it will prompt them to like the company’s Facebook page and show them content that other fans of the page like. 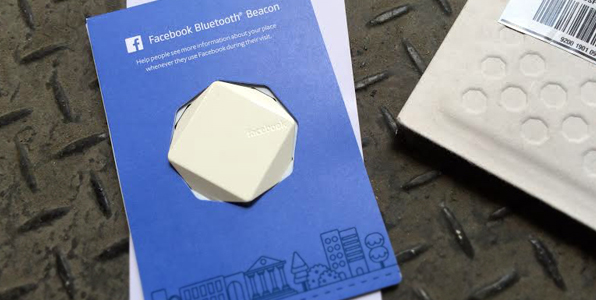 Facebook was keen to stress that information sharing is “one way” – the devices aren’t gaining insights from users they target. It’s also important to note that for the beacons to work, users must accept certain permissions and download an app that accepts the content.

So, is the end game here for all Facebook business pages to install a beacon? With 25 million small business pages already in existence, the potential of this project is enormous.

With integrity and personality becoming ever-important assets for a company brand, it’s essential that content is relevant and engaging to the audience that Place Tips is reaching. That means it’s our job as writers to find out what makes the brands’ consumers tick, and channel that in the content we put out, ensuring it doesn’t feel like spam or newsfeed pollution.

What’s more Facebook has just announced plans to expand its partnership with Shopify. This translates in to a lot more “BUY NOW” buttons and a unique opportunity for brands to offer products and services instantly to target audiences at the click of a button.

The Internet Advertising Bureau reported an increase of 285 per cent on social media marketing spend in the past three years, and businesses are becoming more and more savvy to its advertising power. In response to this, Facebook is ramping up its business offering and we’re keen to find out more…

Businesses have been using Facebook as a marketing tool for nearly as long as Mark Zuckerberg was using it to pick up women at uni, so the launch of Facebook For Business this month didn’t exactly stop us in our tracks.

Managing social media for many of our clients, it’s our job to be ahead of the curve in terms of what tools are out there to maximise brand awareness – Facebook and Twitter are probably every company’s first port of call.

I’ll resist the urge to PR it too much, but Facebook For Business offers users a completely streamlined approach to managing their corporate pages (sorry, but that’s what it does).

•Easier account management
Gone are the days of faffing about with multiple logins and sessions timing out when another member of your team logs in to post something at the same time as you.

•Advice on targeted posts
It offers step-by-step instructions on how to reach the right target audience when boosting your posts, as well as providing an analysis of how well the post did or didn’t perform.

•Measurements and insights
It will tell you things like the number of new page likes, how many people your posts reached and the level of engagement each post received. So, if your video of a monkey and a tiger having a cuddle got far more likes than the news article about crime rates in the city centre, it begs the question, is your content right or are you targeting the wrong audience for your brand?

For smaller businesses, FBfB (awful acronym isn’t it?) could be a really useful addition to their marketing tools. However, much larger corporations, or those already quite adept at social media, probably won’t be too affected by it. Perhaps this will be levelling the playing field.

For PRs, these insights and much more complex ones are being monitored closely every day and have been for a long time. Bringing this level of insight to the attention of all businesses on Facebook marks an acceleration in pace for the industry to keep ahead and provide clients with an even higher level of expertise.

Crisis Management: The Dos and Don'ts

Crisis management forms a sizeable portion of the work PR professionals do, and although we pray it’s never needed, the process, especially when a life-threatening tragedy occurs, needs to be handled sensitively, professionally and swiftly.

This week, a terrible crash on The Smiler at Alton Towers left four people seriously injured. From a PR’s perspective, it is our job to support the client or brand in such a crisis, while ensuring those involved are handled graciously, which is why we have great admiration for the Alton Towers PR team, which has, so far, handled the terrible incident in an original and effective way.

Often, when a crisis hits, companies tend to have a habit of backing away from responsibility and show little signs of emotion. Consider Thomas Cook for example, who issued an apology nearly ten years after the deaths of two children who had been unlawfully killed at one of the firm’s resorts. The law ruled that Thomas Cook had breached its duty of care, yet chief executive, Peter Fankhauser’s told the inquest that his company had “nothing to apologise for”.

In contrast, Alton Towers has been quick to show compassion following the incident on The Smiler. The statement released was also refreshingly honest.

Ian Crabbe, divisional director at Alton Towers said the whole team at the park was “devastated” by the incident and continued, “Our thoughts and main concerns and focus are with injured people and the 16 people that were stuck on the train and their immediate families. That is our major concern.” The social media channels and website are being regularly updated and the theme park also made the decision to close the business yesterday, and again today.

As experts in crisis management, we always follow the news to see how other brands handle and react to an emergency. We’re also conscious that all organisations can be vulnerable to crisis.

We’ve put together a few pointers to dealing with an unexpected crisis:

–Prior to any crisis, identify your spokesperson and ensure that they are media trained. The spokesperson should be an authoritative figure in the company.

–Do your research first – It’s better to intentionally slow the pace of the story rather than release an ill-considered statement.

–Develop a holding statement and provide detailed information – if you don’t, someone else will!

–Be honest and compassionate.

–Regularly update your stakeholders and media throughout the crisis.

–Consider all channels of communication – not everyone reads the papers, so publish your statement on social media and the business’s website too.

We wish the victims of The Smiler crash a speedy recovery.