Tis the season to go shopping…

Scuffles in supermarkets, bust-ups over bargains, savings from the sofa and mêlées on the markets, Black Friday, Cyber Monday and Small Business Saturday are three of the retail sector’s main events, with sales expected to be higher than ever.

On the high street, online, on social media, on Smartphones and on TV, stores are applying extravagant discounts in a bid to lure shoppers in, boost early sales and kick start the festive shopping season.

Black Friday (28th November), although an American phenomenon, surfaced in the UK in 2010 when Amazon and Apple decided to extend their offers to shoppers outside of the USA. As British shoppers love a bargain, the day has led to reports of police being called to supermarkets to break up fights between shoppers and even close stores today and Visa expects we will spend £518m on its cards alone.

However, Cyber Monday (1st December), the day for internet deals and discounts, is expected to be the UK’s busiest online shopping day. According to IMRG, the UK’s association for online retailers, we are expected to splash out a whopping £649 million on the day, via the internet and Smartphones.

On the other hand, you can shop locally, support local traders and businesses and take part in Small Business Saturday (6th December). Visit your local high street, nearest town centre or market to support the work of businesses, families and manufacturers in your own area. These are what keep local communities thriving and last year was a runaway success with over 40% of Local Authorities supporting the campaign and around £460 million spent on the day. The hashtag #SmallBizSatUk is already trending on Twitter so get involved!

As specialists in retail, brand and online PR, we like to keep our finger on the pulse of the UK’s shopping habits and the next few days are certainly going to demonstrate the spending power of the nation. Happy shopping!

This week saw the launch of Snapcash, a money transfer service launched by the popular app Snapchat, with an all singing, all dancing promotional video to boot.

As Financial PR specialists, we were particularly interested in the new function, which allows Snapchat users over the age of 18 to instantly send money to friends for free via private messages. At the moment it’s only available in the US, but there are plans to expand this should it prove popular.

Users are able to swipe into the chat function on the app and enter the dollar sign followed by the amount they want to send, transferring cash to their friend at the touch of a button.

This is Snapchat’s first joint venture and is the product of a partnership with Square, a payment processing company that will securely store the debit card details of those using the function.

50 per cent of Snapchat users are aged between 13 and 17, while Market Watch speculates that a large amount of users are ‘tech-savvy 20-somethings’.

The introduction of this technology to an app with such a young audience shows how advancements in payment technology are spreading into the mainstream more and more. With approximately 700 million photos and videos being sent via the app every day, the technology will potentially be used millions of times each day.

Our client Tuxedo Money Solutions, a payment technology provider, notes that the emerging payments market is really beginning to flourish, with reduced fees on cross-border payments an area that could be game changing for the industry. The growth of virtual card payments and development of alternative payment platforms like Snapcash mean international transfers are becoming increasingly accessible.

Twitter users have taken to predicting what could be next for Snapchat after hearing its news this week. @rileysroberson’s ‘Snackchat’ idea was our favourite. Biscuits at the touch of a button? Now there’s a thought…

So the Internet did not technically break this week, but Kim Kardashian certainly gave it a good try…

When the cover of Paper magazine featuring Kim K hit the ’net on 11th November, social media went into full meltdown. Predictably, abuse and ridicule ensued, but so did admiration and awe.

The JAM team has debated whether we like the pictures or not (we are still tickled by the observation that she looks like a glazed Krispy Kreme Doughnut), but there’s one thing we can’t deny – the Kardashian machine is PR genius.

Consider the numbers alone: Kardashian West now has more than 25 million followers on Twitter and has tweeted over 18,000 times; Kim has posted 2,134 photos on Instagram and has 21 million followers there; and, on Facebook, she has 24 million fans. Her digital impact is fascinating and she knows what she’s doing – we highly doubt she cares whether or not we ‘like’ her latest magazine cover.

Speaking of monumental assets, Philae touched down on the surface of the singing comet this week. We were once again, glued to our computer screens! The mission is already assured of its place in history. Philae’s journey took 10 years and planning for the mission began 25 years ago!

The tweet put out by @ESA-Rosetta confirming Philae’s touchdown received 6,161 retweets and 3,332 favourites. This is even more engagement than @papermagazine secured when they tweeted the now infamous Kim K cover for the first time (3,435 retweets and 2,844 favourites).

As a full-service consultancy, JAM offers a specialist digital service and so we’re always keen to see what’s trending on the web. A particular social media highlight for us happened earlier this year, when we successfully grew the C.K Magma Facebook page by 800% in just three months. You can’t argue with cold, hard stats!

And that rounds up another great week at JAM! 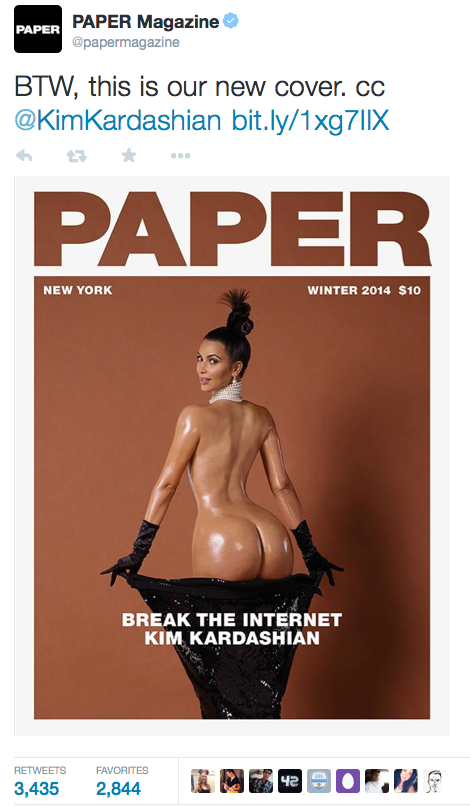 Christmas is BIG business in the retail world, and this year is no exception. UK retail sales over the festive period are set to rise by 2.6% to £91bn, and online sales are also predicted to break a £13bn record. It’s no wonder with all this extra business up for grabs that retailers and brands up the tempo to compete in this fierce, but ever so merry market place.

Nowadays, Christmas marketing campaigns have become somewhat of a tradition, perhaps as much as the annual Love Actually viewing, or leaving mince pies out for Santa. We all wait for the day where we can run back to the office, and shriek to our colleagues that “the red cups have arrived in Starbucks!” – now that’s what I call Christmas.

Perhaps the most anticipated campaign of the year is the John Lewis Christmas advert. Launched this week via social media before TV, people nationwide gathered their tissues and sat in anticipation for the two minute, joyous tearjerker.. This year #MontyThePenguin set the nation unsurprisingly into a Twitter frenzy cooing over the lovesick fluff ball.  By 10am on the morning it launched there had been a reported 11,363 mentions of the hashtag, according to social media agency, We Are Social, and it continues to grow.

Twitter’s UK managing director Bruce Daisley told The Huffington Post: “This year’s John Lewis ad is swooningly brilliant. They expertly focus on telling beautiful stories in an understated way. We can just hope and pray it doesn’t lead to more Tom Odell being played on the radio”. Well we do, Bruce.

The battle for the TV premier of the ad was won by Channel 4, thanks to its laugh out loud programme, Gogglebox, during which Monty the Penguin will be making his television debut, the superstar!

New to the John Lewis campaign this year, you will also be able to purchase Monty toys (at a not so festive £95), Christmas cards, umbrellas, even schedule a visit to the Monty Grotto. The indoor ‘Antarctic-themed space’ will play host to Google’s virtual reality technology, allowing visitors to try new goggles made entirely from cardboard, ‘Google Cardboard’. Microsoft has also contributed to the Monty Grotto by introducing a toy machine, which will bring children’s real toys to life by animating them on screen.

Another advert that is making waves this year is the new Argos, Get Set for Giving, ad. A great reflection of the retailer’s ‘digital transformation’, and the first of the Argos ads not to feature the Argos aliens. Accompanied by Run DMC’s Christmas soundtrack ‘Christmas in Hollis’, we think Argos is onto a winner. Argos for Business (AfB), part of the Home Retail Group is one of our clients at JAM, so we will be keeping an eye out on the AfB social media for the nation’s reaction.

Strong contenders for the Christmas campaigns of the year from John Lewis and Argos, we’re sure you’ll agree. Is anyone going to top it? Just like Monty, we’ll be waiting…